This post appeared as a column in the May 23, 2021, issue of the St. Michael Catholic Church bulletin. It is modified from a Wednesday Witness blog post written for Saint Andrew Catholic Church.

A few years back I spoke with a teenage girl who said she wasn’t sure she wanted to be confirmed because it didn’t seem relevant to her future success. Her mind was on her grades and test scores, a degree and a career. She had things to do, and from where she sat, God’s gifts seemed quaint and His will, irrelevant.

But we are created for more than economics. We are made for love, and the sacraments give us the graces to love as God loves. Through the three sacraments of initiation—Baptism, Eucharist and Confirmation—we are welcomed into God’s family as His children; we receive the gifts, graces and fruits of the Holy Spirit; and we receive Jesus Himself so that we can become more like Him.

END_OF_DOCUMENT_TOKEN_TO_BE_REPLACED

Blogger’s Note: This reflection was originally published in the Sunday, January 19, edition of the St. Michael Catholic Church bulletin.

Last weekend marked the official end of the Christmas season and the Church’s return to Ordinary Time. Of course, our life in Christ should be anything but ordinary. In early days, Christianity was known as the Way, and its followers lived lives that were different from the world around them, marked by solidarity, charity and joy.

As modern disciples, our lives should also be distinct from the world around us. As a community, this distinctiveness appears in our regular participation in Mass, Confession and the other sacraments; in our reverence for and adoration of the Holy Eucharist; and in our visible adherence to the teachings and traditions of the Catholic Church as taught by Jesus and His apostles.

We are also called as individuals to follow Christ in a particular way. This Advent and Christmas I found myself reflecting on our Blessed Mother, Mary, as the model of discipleship. While she, like all of us, was called to holiness, her specific vocation was unique and deeply personal. Called upon to bear the Son of God, once she said yes, “the angel departed from her” (Luke 1:38). She was left to explain her unplanned pregnancy to her betrothed and her family, to risk death by stoning, to endure the accusing stares of her community, to bow in obedience to the will of God and watch her son suffer and die at the hands of her own people. END_OF_DOCUMENT_TOKEN_TO_BE_REPLACED

Note: Last Saturday evening we had an informational meeting for Confirmation students and parents. Not everyone was able to attend, so I am attempting to recreate the brief Confirmation pep talk I gave, in writing, for those who missed out. 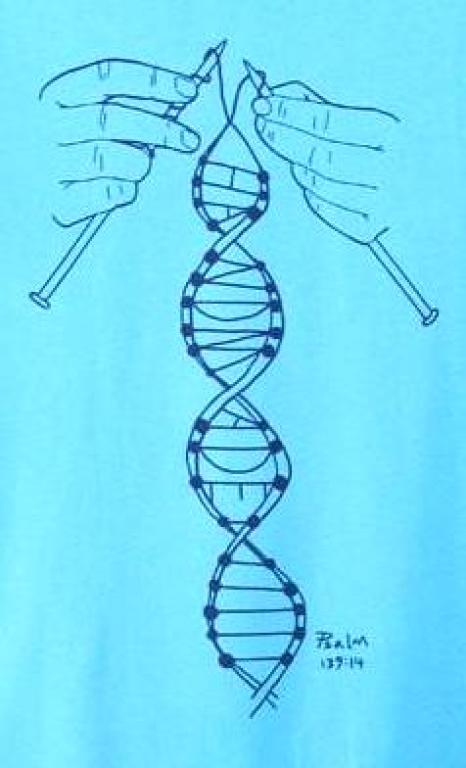 I want to start with a question: Why are we here? Does anyone know? Is it just because I called a meeting?

I’m wearing one of my favorite shirts today: It has a drawing on it of two hands knitting what looks like a DNA strand, and if you look closely at the helix, you’ll see the word HANDMADE. At the bottom is a reference to Psalm 139:

You formed my inmost being; you knit me in my mother’s womb. I praise you, because I am wonderfully made; wonderful are your works! My very self you know. My bones are not hidden from you, when I was being made in secret, fashioned in the depths of the earth. Your eyes saw me unformed; in your book all are written down; my days were shaped, before one came to be. – Psalm 139:13-16

What does this tell us about why we are here? It tells us that God created each of us individually, with a specific purpose in mind, that He knows us intimately and loves us completely. Genesis tells us we are made in God’s image, and the Gospel of John tells us God is Love. We are made by Love, from love, to give and receive love. This is our whole purpose: to learn to love as God loves and ultimately find our way back to Him. The meaning of life is no more complicated than that. END_OF_DOCUMENT_TOKEN_TO_BE_REPLACED

In the past two weeks, I’ve written a couple posts on the crazy busy-ness of May with three teens and a kindergartner in the house, a globetrotting college student returning home, and a 10-month-old puppy in a dog’s body underfoot. The schedule has not relented: END_OF_DOCUMENT_TOKEN_TO_BE_REPLACED

Blogger’s Note: This was my final short reflection paper for Module II of the Catechetical Institute, on liturgy and the sacraments. I continue to be drawn toward the person and activity of the Holy Spirit, which I’ve been slow to comprehend in the past.

The Spirit is the fuel of the Church, the energy and life force of the Body of Christ. And we can’t get him through heroic effort. We can only get him by asking for him. That’s why, for the past two thousand years, the Church has begged for this power from on high. Jesus told us that the Father would never refuse someone who asked for the Holy Spirit. So ask! And ask again! Realize that every liturgy is a begging for the Holy Spirit. (Bishop Barron, Daily Gospel Reflection 5/8/18).

The second pillar of the Catechism of the Catholic Church (CCC), “The Celebration of the Christian Mystery,” pertains to liturgy and the sacraments. The opening paragraphs (CCC 1066-2068) connect back to the first pillar, “The Profession of Faith,” by re-asserting God’s plan outlined in the Creed:

“For it was from the side of Christ as he slept the sleep of death upon the cross that there came forth ‘the wondrous sacrament of the whole Church.’” For this reason, the Church celebrates in the liturgy above all the Paschal mystery by which Christ accomplished the work of our salvation (CCC 1067).

The liturgy in its various forms celebrates the great mystery of Jesus’ saving mission. It is the “public work” (leitourgos) of the Church: the “participation of the People of God in ‘the work of God’” (CCC 1069), which manifests her as a visible sign of communion between God and man (CCC 1071).  The Church is born on Pentecost, the new Body of Christ on earth following the ascension of the resurrected One, and Jesus acts “in and with” this body through the sacramental economy (CCC 1076). The fruits of this mystery are shared liturgically, especially through the sacraments, “efficacious signs” (CCC 1131) instituted by Jesus and entrusted to the Church to give us the grace we need to live lives of holiness. END_OF_DOCUMENT_TOKEN_TO_BE_REPLACED