Art must make perceptible, and as far as possible attractive, the world of the spirit, of the invisible, of God.”

The quote above is taken from Pope John Paul II’s “Letter to Artists,” published on Easter Sunday in 1999. I’ve been reflecting on that letter in terms of the saint’s call, beginning in the late 1970s, for a new evangelization, and also in the context of young Karol Wojtyla’s cultural resistance efforts with the Rhapsodic Theater during the period of Nazi control of Poland. The more I reflect, the more convinced I become that the arts—visual, literary, theatrical, and musical—as well as beauty defined more broadly, are ideal tools both of evangelization and of Catholic resistance and encouragement today.

Beginning with the artist as an image of God the Creator, St. John Paul II makes a strong case for the special vocation of the artist in service to the true, the good, and the beautiful; their ideal role as revealers of the Incarnation and the Good News; and the necessity of art to the Church and vice versa. END_OF_DOCUMENT_TOKEN_TO_BE_REPLACED 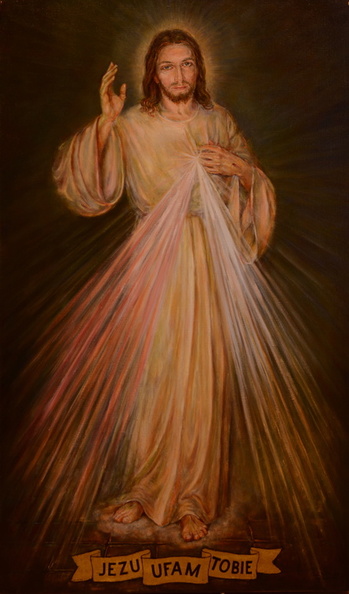 “Proclaim that mercy is the greatest attribute of God.” – Jesus to St. Faustina

Devotion to Divine Mercy is not every Catholic’s thing. Some people struggle with the image of Divine Mercy: Jesus, His right hand raised to bless and heal, His left indicating his heart, from which rays of red and white, symbolizing blood and water, pour forth as a fountain of mercy for souls. Every version I’ve seen has been a bit mysterious and unsettling—which seems appropriate, given that it’s a vision of the resurrected Christ.

Some don’t like the chaplet, which is simpler and more repetitious than the rosary. Some consider the visions of a poor Polish nun to be private revelations: fine for her, but not necessary for us (even though she is a saint and was canonized by another saint).

END_OF_DOCUMENT_TOKEN_TO_BE_REPLACED 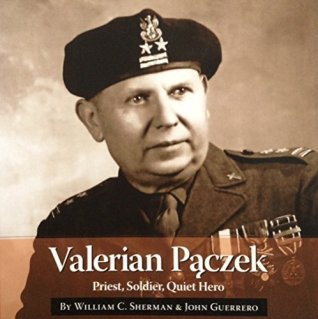 My first visit to the University of Mary Bookstore, a slim little volume caught my eye, perhaps because I was hungry. The book was titled Valerian Pączek: Priest, Soldier, Quiet Hero by William C. Sherman and John Guerrero and is pictured to the right. In proper Polish, the good Father’s name is rendered Walerian Pączek (pronounced va-LAIR-yan POWN-chek, though it appears his Plains parishioners may have said it “paycheck”) and his last name is the singular form of pączki, those stout, fruit- or custard-filled pastries Poles and others enjoy on Fat Tuesday.

I received the book for Christmas and finished it last night. At just 88 pages, it is a quick read, and worth every moment — if for no other reason than to imagine this Polish hero serving as a parish priest in rural North Dakota and recognizing that most of the time, we have no idea what people have been through in their lives.

Fr. Pączek was born in 1909 in East Prussia, a region of Poland which at that time was under German control. He grew up speaking Polish and accentless German, became a Catholic Pallotine priest, joined the Polish Army, served in the British Army after World War II, then moved to the States, ultimately to become a parish priest at historically German and Czech parishes North Dakota. He was quiet about himself and his experiences in the War, so most people had little idea that their Polish pastor:

Juxtapose these facts against this blog post from a former parishioner of Fr. Pączek’s, who recalls going to the Polish priest for Confession because he was more lenient than the other priests in terms of penance, and the words “quiet hero” seem particularly apt. Only at the end of his life did the parishioners who remember him really begin to know him.
The book is clearly a labor of love. Sections of it read like a draft, raising as many questions as they answer — and since so little was known about his life before Fr. Pączek’s death and he was not inclined to make it easy for people to sort out his past, many of those questions and controversies will not be answered this side of heaven. But all told, it is a compelling portrait of a man who shouldered the burdens of war and carried them with quiet dignity all the days of his life.

This time tomorrow, Gabe and I will be winding our way through security lines at Minneapolis-St. Paul International Airport, preparing to embark on a pilgrimage to Poland to join Pope Francis and millions of other Catholics from around the world for World Youth Day. This will be Gabe’s first flight, first international trip, and first World Youth Day; for me, it’s my second overseas trip (Iceland being the first), one of my two or three longest flights (Iceland and Hawaii), and my second World Youth Day (2002 in Toronto with Pope John Paul II).

For me, it as also very much a journey to the Motherland. My mom is a Polish Catholic farm girl whose grandparents immigrated from Poland in the first half of the 20th century: the Galubenskis and Koczwaras. The Thorp clan is so diverse in its various bloodlines that Polish has always been the nationality I’ve identified most strongly with: it’s the only foreign language I’ve heard older relatives speak, the one ethnic cuisine I’ve had older relatives cook and serve, the language I studied in college, and the only poetry I’ve ever taken the time to translate myself. Poland’s history is deep, beautiful, tragic, and heroic. And even now, remarkably Catholic.

I am blessed to make this trip with a number of friends from here in Minnesota, and especially with Gabe, whose faith as a teen almost certainly surpasses my own. It is my hope that this trip deepens my own conversion and his, so we can be the men God has called us to be with courage, joy, and zeal.

I’m sure I’ll post much more on this trip when we return. Pray for us and for our family and friends while we’re away, and know of our prayers for you! St. John Paul II, St. Maximilian Kolbe, St. Faustina Kowalska — all you great Polish saints and all you holy men and women — pray for us!