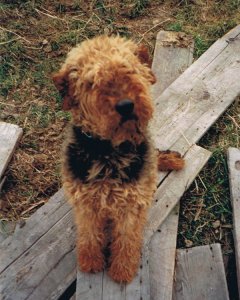 Blogger’s Note: This column originally appeared in The Pioneer daily newspaper, Big Rapids, Mich., March 10, 1998. The “incident” happened in Winter 1996-97. Our friend T at Holy Guacamole asked me to share this story awhile back, and I finally dug it back up …

Last year at this time Jodi and I were finishing up our lease of the second floor of an old town house in Canton, S.D.

Canton was the kind of little town that could charm you out of your boots and hat and make you stay awhile — Norman Rockwell painted pictures of towns like Canton.

We rolled into Canton one evening in September, just as the sun was setting, to take a look at an affordable duplex in town. “Turn left just past the courthouse,” the landlord has told us, and we did. The courthouse was a big stone building three stories tall with a clock tower, and a working, illuminated clock face on all four sides. It sat alone in the middle of a block-square patch of lawn, with green shrubs and plants surrounding.

The next block north was home to the city park and library, and our house was on the next block, kitty-corner from the Lutheran church. The church was another tall, stone building, with bells that rang every hour into the evening.

The apartment was nice enough — two bedrooms, high ceilings and huge, drafty windows. It was newly painted and carpeted, and quickly, by the looks — still it was our first place, and homey enough.

Besides, we had a view of the clock tower, and an ear for bells.

The town was also home to a couple of antique shops, a decent hardware store, and the Black Angus, a bar and restaurant that served good steaks, prime rib and pork chops, and had a good selection of imports and regional brews for a town its size. They served them all capped with olives. (The olives were to kill the “beer taste.” I always ordered sans olive — if you don’t like the taste of hops, save your money and buy domestic.)

It was at this time last year, it that charming little town a stone’s-throw west of Iowa, that I became known as the “new guy with the cat-killin’ dog.”

Boomer lived out back beneath a big black walnut tree — in a doghouse with a carpet-scrap door, a 15-foot chain, two dishes and a rawhide chew bone. The doghouse was tucked neatly beside an old garage used by the landlord for storage and by a few mangy stray cats for shelter. The cats came around less once Boomer arrived.

Boomer’s a big dog, and living in town on the end of a chain was no easy thing. Stray dogs would come and steal his bone, and squirrels would scold him from the neighbors’ yards. His best opportunity for exercise was on the end of a leash; invariably we’d spook a rabbit on the courthouse lawn, and he’d nearly choke himself to give chase.

I was very careful, when I brought Boomer west, to be sure he was properly vaccinated and licensed to avoid any problems should he get in loose in town.

And one night, he did.

I went out after supper to give him some scraps. I called him — “Hey Boomer!” — and got no response.

Usually he’d be lying in the snow until well into the evening, watching the house for signs of table scraps or an evening walk. He didn’t normally retire to his house until late — the flap over the door didn’t offer much of a view.

I stomped a path through the snow until I noticed Boomer’s chain in a tight ball at the base of the tree. The last link was stretched out straight, and Boomer was nowhere in sight.

The chain was bunched up as though it had snapped back after some great and sudden stress, and Boomer’s tracks lead up the driveway, six feet to a bound.

I made my way past the old sedan our downstairs neighbor drove and found a huge orange tomcat lying dead in the drive, smelling strongly musky, and still warm.

I scooped up the cat and spread fresh white snow over the red, then Jodi and I searched for Boomer, she in her car and I on foot.

I followed the sounds of barking dogs and the jingle of dog-tags and chain to him, and led him home. His nose was bitten, scratched and bloodied, and he reeked of tomcat for days afterward.

Two days later, we got a phone call from a little old lady a few doors down. I had told our downstairs neighbor about the cat, so she wouldn’t be alarmed if she uncovered bloody snow on the driveway, and she had told the ladies in her church group, one of whom had been feeding the big stray tom.

I called her, figuring it was the neighborly thing to do, and she explained that while the cat was, in fact, a stray, she had hoped to take him in.

“What about my other cats?” she asked. “I let them out from time to time — they’re bound to roam …”

“What about our children?”

I did not mention the origin of the phrase “fight like cats and dogs.” I did my best, instead, to explain that although Boomer had broken his chain to get to the old tom, and although he did, in fact, kill the cat quicker than it could run up the driveway, he was not a blood-thirsty animal and had never acted aggressively toward adults or children. (Secretly, I was a tiny bit proud — Airedales are known for their hunting prowess, and he’d never acted aggressively toward anything before.)

We finished the conversation cordially enough … after I agreed to her demand that I report the “incident” to the sheriff.

“Now, if he runs down the street and kills a cat in your neighbor’s yard, then we’ve got a problem,” he said.

We had no further complaints from the neighbors and heard nothing of any other cats killed that night, perhaps because a big dog with tags and chains jingling and reeking of tomcat is not so hard to avoid. At any rate, I figured we were safe.

Even so, as might be expected with old ladies and church groups, the news of Boomer’s ferocity toward felines traveled quickly, and his reputation followed us wherever in town we went. I could almost feel the eyes watching us over a sinkful of dinner dishes. The cats knew, too; they would sit glaring at us from porches and beneath shrubs, but would come no closer.

A week or two ago, the postal service forwarded a postcard from the vet in Canton to our home in Mecosta. Boomer is due for his shots and license again.

And, it seems likely, the old ladies in Canton are still on the lookout for the new guy with the cat-killin’ dog.