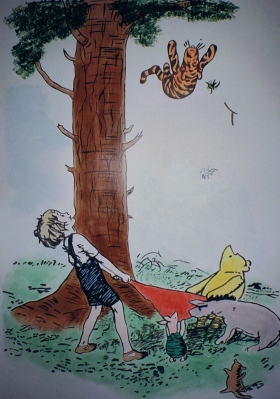 [Blogger’s Note: This is a classic Pooh mural my sister painted in the baby’s room in Michigan when Brendan was a toddler, just before Gabe came along. There was a plaque alongside with the following inscription: “Getting Tigger down,” said Eeyore, “and Not hurting anybody. Keep those two ideas in your head, Piglet, and you’ll be alright.” The rest of this post originally appeared in the Friday, Oct. 14, 1997, edition of The Pioneer daily newspaper, Big Rapids, Mich. The first third is a bit much, but I was excited at the time that people would pay to read this sort of thing. It is the column referenced in yesterday’s Almost There post.]

It’s Friday, and this is a Friday kind of column.

It’s Friday. Not my usual day for a column — I would say that too much work kept me from writing Tuesday’s column, except that my column is part of that “too much work,” and so is no real excuse. I got my other work done…

I could tell you that other people’s columns took precedence, except that a day or two ago I was accused of writing with honesty, and to be honest, everyone including me expected I’d have a column in for Tuesday. I can’t even blame a lack of ideas — I’ve got no less than a dozen columns started right now. No ends in sight, though.

I have slowly discovered that I have a readership. (A readership!) It’s a good feeling, and a source of pressure. I like to write columns, and now I feel I have a responsibility to turn out quality material every Tuesday so as not to disappoint my readership. Several weeks back I ran a piece out of my college journal — I drove from Big Rapids to Remus and back in the middle of the night to deliver that piece to the paper because I hadn’t written my column and didn’t want to let the Taylors down.

But, as our night editor used to say (at least once), “{People don’t want to see how the sausage is made.”

They want the product.

What follows is this week’s morsel.

October 8, Jodi and I signed our names and purchased a home — three bedrooms, a bath and a half, brick halfway up and a two-car garage. It’s on Maple Street. (Sounds homey, doesn’t in? A friend of mine, Ed Quon, lives on Micheltorena Street — which of us is married and expecting?)

We haven’t actually taken possession yet, and out baby is due Nov. 19, which means any day now. [Blogger’s Note: Too funny. Brendan was born what, 40 or so days later?] At this point, the baby has more stuff than his or her parents, and we’re anxious to get in, repaint the baby’s room, and decorate. We have to repaint the room — its current color just isn’t Classic Pooh.

Classic Pooh is that subtle, old-fashioned Pooh based on E.H. Shepard’s illustrations — very nice; cute and pricey. Will the baby like Classic Pooh? I don’t know.

“Babies like to see their parents,” I’ve been told, by parents who wish they would have gotten the reversible handle.

I suspect parents like to see their babies. Even so, will the baby like the stroller we have?

Snugglie? [Blogger’s Note: Sic. Snugli, not Snuggie…] Not yet. Wedge-shaped pillow to keep baby sleeping on his or her side or back? Nope. Outlet covers? In a couple months, probably — we don’t know yet how many outlets we’ll need covered/

How about corner and door pads — have you seen these? The package proclaims, “Give your child the safety of a padded room,” or something like that.

My kids ought to be in a padded room — is that what they’re telling me?

With millions of products on the market that new parents “need,” how does any baby survive to age one in a family with average income?

The retailers and manufacturers have expectant and anxious parents right where they want us. At the beginning of life, just as at the end, people are made to feel guilty unless they spare no expense.

How did babies survive before crib monitors and motion-sensitive night light/musical crib mobiles? How did parents survive before Diaper Genie? [Blogger’s Note: This is the one product about which we were both excited and sorely disappointed. Yes, it makes disposal of diapers relatively odor-free; the magically disappear and are locked away, sealed in scentless plastic…where they ferment for days until you are forced, gagging, to empty the “Genie.” Apparently the pail/bag in combination is somehow scentless, but a bag full of rotting waste on its own reeks regardless…]

What about names? We have two in mind for a boy — Brendan James (middle-named after me) or Zachary Venjohn (middle-named after Jodi, whose maiden name is Venjohn). We like Brendan James, because our oldest boy will be named after his dad. On the other hand, we like Zachary Venjohn because it’s unique, it would mean a lot to Jodi and her family, and he’ll still be named Thorp after his father and his father’s fathers.

For baby girls, it’s either Emily Rose or Rachel Elizabeth. Probably Emily, but will she like it? Is it too old-fashioned? Too cute? Will it serve her well in her profession?

Can you yell it out the back door?

We need to save enough money to cover Jodi’s time away from work and our bills. We need to find day care for when she goes back to work. I need to get a cell phone or a pager [Blogger’s Note: Remember pagers? I wound up with a “bag-phone,” which I lugged everywhere and dubbed Baby-Com.] — what if I miss the birth? Will Jodi remember to breathe? Will I?

With all these questions flitting around my head, how do you expect me to concentrate on a column?