Teach us, good Lord
To serve thee as thou deservest,
To give and not count the cost,
To toil and not seek rest,
To labor and not ask for any reward
Save that of knowing that we try to do your will.
– St. Ignatius of Loyola

We’re nearly three weeks into Lent and thus far it’s been a train wreck of sorts. On one hand, a couple of daily spiritual investments I’m promised to make I have successfully carried through with thus far. On the other hand, every sacrifice I committed to for this Lenten journey I have failed to observe at least once. I suppose it could be construed as a point in my favor that I chose to “give up” aspects of my day and diet that have apparently become compulsive – however, it’s pretty sad that it took Lent to make me realize how habitual my eating and technology usage is, and even sadder that my newfound awareness has yet to translate into consistent action.

Last night I went to the church for brief Knights of Columbus project meeting. While waiting for my collaborator, I listened in as Fr. Meyers answered questions from the Monday night adult catechesis small groups. The first had to do with the icons of the Apostles in our sanctuary, and specifically, the meaning of the positioning and gestures of their hands. Father offered a brief overview of icons and assured everyone that the gestures do have meaning – then, spying me, he said, “In fact, Jim Thorp, who is standing just over there, is being trained to give tours of the church…”

I began to retreat down the stairs, only half in jest.

Jodi and I are a welcome couple, greeting families who are new to our parish at a regular lunch. We are supposed to offer them a tour of the church, but since we’ve never been on one ourselves, I decided to schedule one with a local deacon who knows the art and symbolism in our church very well. Word got out, and now, it appears, I have become a tour guide.

I am overextended, as always – but during Adoration last night, I identified something else in me that needs deeper reflection this Lent: I have become an Unjoyful Giver.

You may look at that list and say, “Well, maybe you’ve got enough on your plate – you help out plenty, plus you’ve got four involved kids and a new baby. Cut yourself some slack!” And I would be grateful for the vote of confidence, except for the following facts:

The truth is, I want to do what I want to do. I’ll make time for the stuff I enjoy, and the rest I find myself trying to avoid. Also, I pay only lip service to discernment. Aside from the rare weak moment when someone catches me totally off-guard, when I’m asked to volunteer, I generally tell people I’ll prayerfully consider it. In my case, “I’ll pray on it” usually means “I’ll pray around it.” Last night I came to realize that saying a prayer and then considering is not the same as prayerfully considering. I have not been asking what God wants me to do – how He wants me deployed. As a result, I’ve said Yes to things I shouldn’t have, and have become bitter about things I want to do but don’t have time to do well. And I’ve probably declined opportunities I should have leapt at, as well.

Indeed, this is part of the problem with my Lent thus far – I did not delve deeply into what God wanted from me, or think through what it would require. I ran headlong into Lent without looking, without prayerfully considering, without sufficiently preparing. I was looking back over my shoulder to see who was in pursuit, and smacked headlong into Ash Wednesday. I’m still recovering, I think.

Right now, I can think of no worse feeling than doing a half-assed job for God – and the latest edition of “Columbia” magazine gave me some insight into why. See, God doesn’t just love us – He isn’t merely a love-ing God. He is love – all love – it’s his very nature and being. Now, think of how you felt as a child (or even now) when you disappoint someone. If you’re like me, your agony over letting them down is often in direct proportion to how much you know that they love you. For example, if a stranger says he is disappointed in you, that will have less of an effect than if a teacher says it, and the teacher will have less of an effect than a dear parent, grandparent, aunt or uncle.

Now multiply that times a billion.

When you contemplate God as limitless, life-giving love, you realize there can be only one response in return: joyful reciprocation. And then, if you’re me, you realize how far short of that ideal you fall every day, not only in the community and at church, but especially at home, with those you try to love, and who do their level best to love you back. 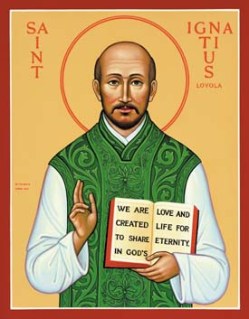 It is my hope that I can make myself slow down and ask, in the solitude of my own heart, where I am supposed to be, and that I can be still and silent enough to hear the reply. Genuinely prayerful consideration of my strengths and weaknesses, as well as where God wants me to be, should lead me in a new direction, in which I become a Joyful Giver, glad to serve, even when it’s difficult, because I know I’m doing the will of the One who sent me. To that end, I hope to make the prayer at the top of this post a daily reminder. Amen?

5 thoughts on “Lenten Trainwreck, and What May Be Learned From It”