It’s a strange sensation, like a high-tensile wire stretched six hours west to a bluff above Bismarck and the Missouri River, a steady thrum, more felt than heard, reminding me that a part of me is there. Not gone, but definitely not here, and I can’t know from one moment to the next what he’s about. We are six hours distant, so I know less about his day-to-day — but I am more keenly aware of him than I have been in years. His absence is a presence, palpable, in our home.

I am wearing an old hardware-store t-shirt he left behind.

I haven’t felt this sort of connection to my eldest son since he first came home with us — the heaviest ten pounds I ever lifted — and I realized he was ours to shape and raise to manhood. Then the connection was direct, bare skin on bare skin, almost frighteningly close: his little chest expanding and contracting, the soft spot where his skull had yet to form pulsing, his every need and discomfort so close to the surface we could almost feel it. Now it’s this invisible strand from one eggish Thorpian occiput to another. He’s always at the back of my mind.

I wonder if he feels it, too?

At different points this past summer, it felt like such a blessing that the University of Mary started late. We planned an August send-off, since Brendan didn’t want a grad party and had lots of time to plan and few conflicting parties to contend with. As we watched more and more friends drop their teens off at college, we thought it was helping to prepare ourselves for this weekend. Perhaps it did. But the past three weeks or so began to feel like a very long goodbye. Brendan left his job at the hardware store at the end of July, and his electrician’s job a few weeks back. His band, Pabulum, played their Final Jam. (They insist they are done as a group, which would be a pity.) All of his friends expect Olivia (who is a senior this year) left for college, and he started packing his things, some for Bismarck, some for storage.

The week before last he took a solo road trip to Michigan to spend some down time with my folks. As God’s providence would have it, a high-school friend of mine has a son who was transferring to St. John Vianney Seminary in St. Paul this fall; he and Bren were best friends in preschool, and Will and his stuff needed a ride to Minnesota. They came back together, two peas in a pod, and Will dropped right into our family. When we took him to the seminary a day or so later, it was actually a little emotional — call it practice or anticipation, we were beginning to feel the ties to Brendan being stretched.

Last Monday, Jodi and I took Brendan out to supper and to get sheets, supplies, and decor for his dorm. We had such a good time eating his favorite food (Mexican, this time at El Bamba), listening to his current favorite band (Icelandic blues-rock outfit Kaleo — Bren, his friends and I are going to see them in October); making him pick out dishes, sheets, and towels when he couldn’t care less. It was a great evening.

And then this weekend. Originally only Trevor wanted to make the trek to UMary, until Gabe realized he could potentially get 12 hours of driving toward his license. Once he decided to go, Emma jumped aboard, realizing that otherwise she would be left to babysit Lily alone. So all seven of us went — the largest single-family contingent I saw on campus.  Jodi and I took Friday off, and we left early in the afternoon so Bren could connected with his NDSU friends in Fargo and catch our local high school’s football game against Moorhead. He spent the night on campus; the rest of us in a hotel. Seeing his friends joyful and comfortable on campus, was reassuring; arriving at UMary itself was doubly so: simple, joyful, peacful.

We met his roommate, Ethan, a nursing student and Vikings fan from western Minnesota, and Ethan’s parents — they seem like a wonderful family — and heard from UMary president Monsignor James Shea, who told the students with clear affection and blunt honesty that their lives were not their own, but a gift for others, and unless they find a way to spend themselves in love, they will have wasted their time here. He told us parents, as well, to step away and allow our children to stumble and fall that they may learn to stand on their own.

He strikes me as a good man, and I couldn’t be happier to entrust Brendan’s young mind and character to him these next few years. 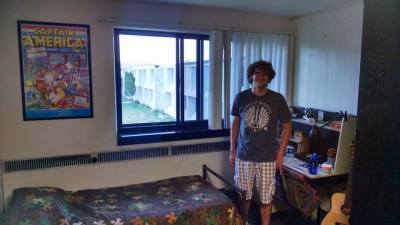 One other speaker shared an Erma Bombeck quote, comparing raising children to flying a kite: letting out more and more string until ultimately the tether breaks and the kite soars away on its own. It’s not a bad metaphor, but I see things differently. This connection between us is stretched thin, but not to breaking; it is keen, sensitive, and strong, and though it can be tangled, wound about the world, stretched to invisibility and nigh untraceable, it cannot be broken.

I told him as much, in a letter I left in one of his boxes. No matter how far away he goes, I am here waiting for his return. Because he is mine, and I love him. 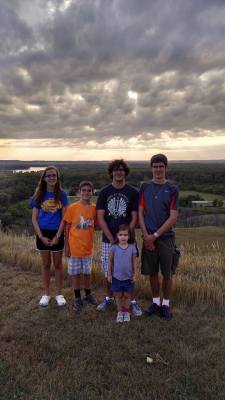 When we finally decided, after dinner on campus, that it was time to head home, Bren walked with us to the Suburban. He hugged each of us (Mom and Lily more than once) and told us he loved us. He told the older kids to keep doing their thing: Emma, to keep baking; Trevor, to keep drumming; Gabe, to keep being himself and making people laugh. Lily’s last words to him from inside the Suburban: “Love you, Brendan! Don’t do anything bad out here!”

We’ve done the best we could. I think he’ll be alright. 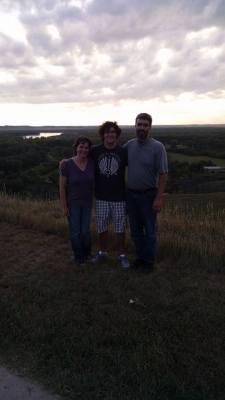