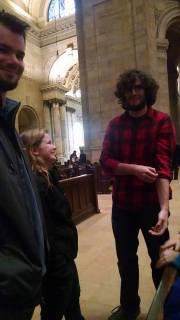 One of the highlights of a relatively laid-back (for once) weekend was heading into the Cities for the 10 a.m. Mass at the Cathedral of St. Paul. Jodi, Trevor, Lily and I did this because the University of Mary contingent (including Brendan) from the March for Life in Washington D.C. was planning to attend Sunday Mass there at that time, as well.

We arrived moments before the buses rolled up. We stood on the sidewalk and peered through the tinted glass, trying to glimpse the woolly-headed college man we knew to be our own. Instead we saw his STMA classmate, Anna, who grinned and waved joyfully at us — and who got a bear-hug from Lily when she got off her bus. We waited for several minutes then, scanning the lines of students emerging from the buses, until at last a bearded, lumberjack-looking fellow in red-and-black plaid emerged and came our way. 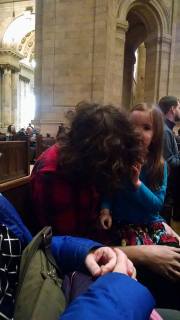 Lily didn’t see him at first; when she did, she ran to him, and I don’t think it was my imagination that her voice caught in her throat as he swept her up. Several of his college colleagues smiled at the hairy young man and his little princess — and I did, too.

It was good to see him, even briefly: good to see him safe and sound, to see his patchy beard grown long enough to cover the bald spots, to see his hair growing still more Robert-Plantish, to see the sense of peace and comfort he has surrounded by his friends. The center sections of the Cathedral had been reserved for UMary, much to the surprise of the regular Sunday Mass goers, and it was good to see so many Minnesota families and friends turn out to greet the pilgrims and pray with them. It was good to see hundreds of college-age men and women enter a Catholic church in quiet reverence, kneel and pray, and receive the Holy Eucharist together.

Lily stayed as close as she could to Brendan — closer even than Jodi. Olivia and her brother Kyle came, too, and sat with us — and after Mass (after a massive group photo at the Cathedral rector’s request) we stood and visited a long while, soaking up what time we could with the young man so like and so different from our eldest son. 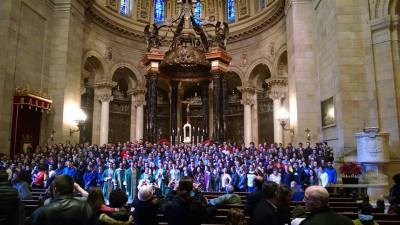 When they left to get on the buses, we went downstairs in the Cathedral to show Lily and Trevor, among other things, the massive Lego model of the building. Then we went out to lunch (far more affordable with just two children). While finishing at Chipotle, we got a text from Gabe that the bus from St. Michael and St. Albert was nearly back from D.C., as well, so we hustled home. Jodi dropped Trevor and I off so she would have room in the car for the teens and their stuff, then she and Lily headed to the church. A few minutes later she arrived with Gabe and Emma, joyful and tired, ready for home-cooking and a bed. For a moment it felt like years since we had seen them — and there they were, suddenly, as though they’d never left. I hadn’t noticed feeling partial until the moment I felt whole again. After we visited a bit, I lay down for a nap — and I took a father’s joy in just hearing their voices and noises of their passing as I drifted off to sleep. They were home and the world was centered once again. 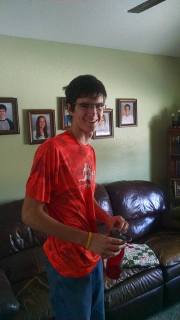 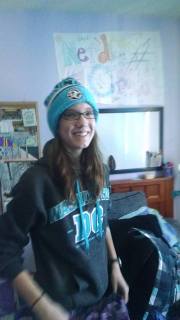