We saw 12 states on our road trip to and from the Keys: Minnesota, Wisconsin, Illinois, Kentucky, Tennessee, Georgia, Florida, Mississippi, Alabama, Arkansas. Missouri, and Iowa. We saw mile after mile of beautiful woodlands, farmlands, and ranch lands that grew greener and greener as we travel south, and one long strip of hard gray asphalt littered with local fauna.

Most prevalent among the roadkill corpses were armadillos: we began to see them in Tennessee on the downward trip, and left off again in Missouri, I believe. Scores of dead armadillos, and nary a live one — when they venture out and whether they are overconfident in their armor or just that thickheaded, I’ll never know.

The armadillos appear to be substantially less bright than even iguanas: in the Keys we saw countless big green lizards along the highway, and only one dead: a brilliant green juvenile hit by the car in front of us. (We also saw one run across a dusty parking lot in front of a car, and if you ever see an iguana running full-tilt, its four legs windmilling from its sides, you won’t forget it!)

As a former lizard lover — I had an iguana named Ike as a teen — this was a thrill, but although we saw a couple up close, either we didn’t have a camera in hand or they were too hidden for decent shot. We also saw numerous brown anole lizards (my first lizard, Zeke, was of this variety; a family member brought him home, probably illegally, from Florida when I was in middle school) and a couple of curly-tails (my second lizard, Max, was a captive-bred curly tail) — and the kids spied a green anole outside the the Basilica of St. Mary, Star of the Sea, on Key West. (Click photos to enlarge.) 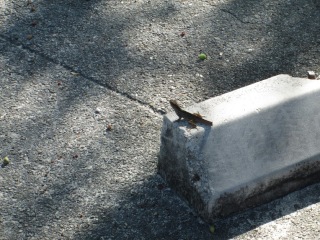 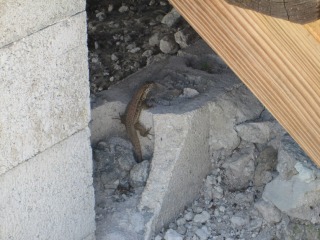 We saw countless species of palm trees. We saw the Key deer mentioned yesterday, of course, including a little velvet-antlered buck, and an endless variety of birds, from the ever-present grackles, crows, and buzzards, to a crowing parade of roosters and clucking chickens on Key West, to black-headed gulls, brown pelicans, American white ibises, and countless other sea birds. We saw endless horizons of grass and water, and signs warning us of bears and panthers crossing. We saw great everglades turtles sunning themselves on the road’s edge.

Our Everglades boat tour warrants special mention for wildlife, of course. We discussed the typical airboat tour, but the kids wanted to go whale-watching, too. Airboat rides are noisy affairs, and gators being relatively prevalent (we saw a half-dozen in the canals along the highway to Everglades City), we opted for a sunset tour with Allure Adventures through the maze of mangrove islands and out to the Gulf. It was just the three of us and Kent, our guide and captain, and before we even left the dock, he spied a manatee surfacing in the river beyond. We got three brief glimpses of the great sea cow as it moved quickly down the river — they move surprisingly fast for their bulk! As we set out on the boat, we saw an osprey eating a fish, and shortly after we emerged into the mangroves, we saw a pair of dolphins hunting in the shallows among the mangroves — again, only fleeting glimpses, as they were too focused on food to jump and play in our wake. (And again, it was amazing how quickly they could move, in this case, in water only a few feet deep.) 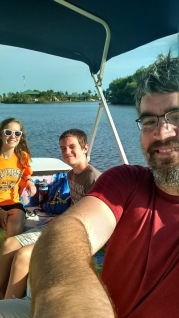 Captain Kent then took us to a stretch of Everglades National Park beach accessible only by boat, with the most amazing powdered white sand (a luxury for tired feet) and the rattle of thousands of seashells with every wave that touched the shore. This island was essentially a sand bar built up along a knot of mangroves, trees with aerial roots that reach down into the water, so that most such islands have no soil at all, except the sea bottom. We saw raccoon tracks in the sand: the only land animal that lives on these mangrove islands, the raccoons down there are not nocturnal, but tidal, according to Kent — they feed at low tide, whatever time of day. We also saw conch shells large and small (illegal to harvest), a horseshoe crab carapace (likely the raccoon’s meal at some point), and a couple dead starfish awash among the seashells. I stepped barefoot among the grasses growing on the island and discovered sand burs grow there, as well. 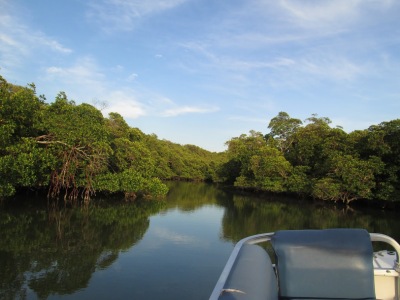 We boarded the boat again and took a winding and at times treacherous route through the channels among the mangroves, in search of more dolphins. Alas, it was not to be. Finally, toward sunset, Captain Kent followed the egrets and pelicans to their evening roosts: a squawking, croaking, clicking rookery of sea birds awaiting nightfall. Countless pelicans, cormorants, and egrets, and two roseate spoonbills made an appearance as we watched the sun drop behind a clouded horizon. On the boat ride back to the dock, we saw two osprey darkly eyeing the water. Captain Kent was a delight — knowledgeable and entertaining — and his obvious love and concern for the wildlife and ability to navigate the maze of mangroves at speed were impressive! 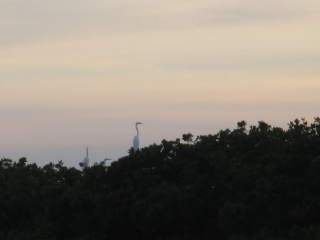 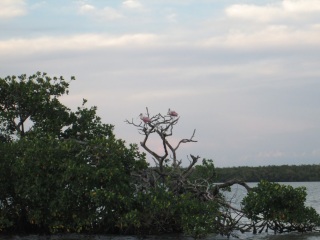 What else did we see? We saw Hemingway’s House on Key West, with countless artifacts and his office just as he used it — and a sun-tanned, silver-haired Hemingway lookalike on the beach before sunset. We saw the Basilica mentioned above, with doors along both sides where windows ought to be, open to the sunshine and breezes — a welcome haven from the sun and pavement of bustling Key West. We saw schooners and yachts and fishing boats, and a crew making a show of unloading their catch for the cameras of tourists. We saw kitschy souvenir shops, high-end art and fashion shops, and a funky clothing and music store called Good Day on a Happy Planet, in which a boisterous bohemian woman sold us coconut and bamboo wind chimes (for Jodi) and a nice cigar-box ukulele (for the family) — we stopped through in the morning, and when we returned for the uke in the afternoon, she actually cheered and sang to us in front of her other customers! 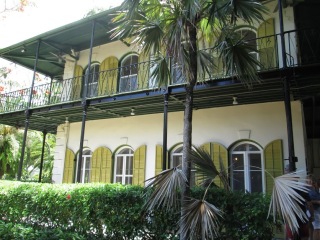 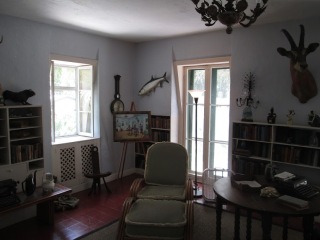 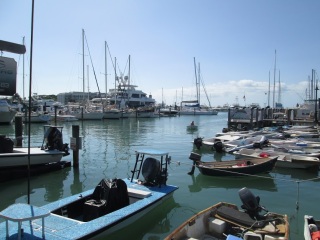 We saw the long and short bridges connecting the islands to the mainland. We saw people fishing, biking, tanning, swimming, and sailing. We saw glimpses of Miami and Atlanta from the freeway; the headquarters of Jodi’s former employer, Randstad, nearly overlooking the Chatahoochee; and St. Peter Catholic Church in the heart of Memphis. We saw the highest concentration of Baptist churches I could imagine in rural Alabama, and met Randy and Pat, the breeders of handsome hunting and working Airedales, distant cousins to our late Boomer. We can’t wait to get back down and come home with a pup, hopefully before snow flies!

I’m sure we saw other things — and I haven’t even touched on the food yet! — but that’s enough for today’s recollection!