Bruno is eight months old today, napping in his crate in a Super 8 outside of Green Bay while Gabe and Trevor read and I write. We spent the past few days at my folks’ place in Michigan, which means Bruno got to spend time with their dog, Maggie, an older, big-boned Oorang type Airedale. Too old to roughhouse too much, but not too old for Bruno to begin to notice something different about her.

What’s it like having an eight-week-old male Airdale pup? I’ve said it before; I’ll say it again: like having a preschool boy who’s somehow going through puberty.

He got his first adult haircut a week ago. What a difference a day makes: he went in a big, woolly pup and came out a much lighter, leaner dog, clearly an Airedale despite a shorter than average cut (due to matting) and his corkscrew ear. He seemed an odd combination of energetic and embarrassed when we brought him back from our groomer—especially when Rosebud said he was naked. 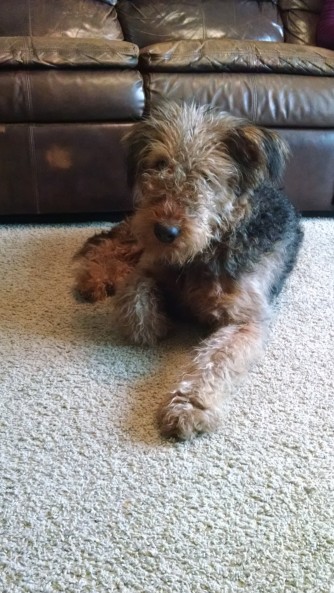 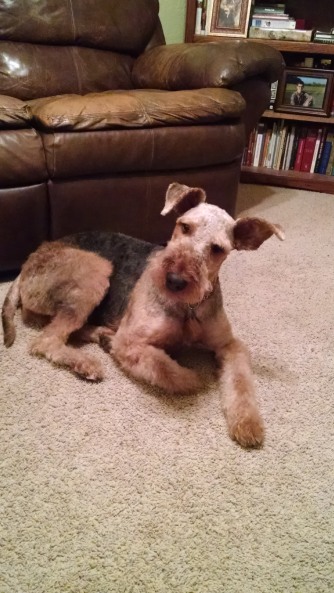 He’s hardly the same dog. But then, he’s been different for the past two weeks. You see, Bruno is blessed.

Two weeks ago I had the pleasure of meeting with Fr. Nathan LaLiberte at his parish in Delano for Confession, among other things. The other things took almost too much time, which led Father to check the time near the end of an hour and say, “I’m sorry, but I have a call coming in—let’s get you cleaned up quick!”

The sacrament was not rushed, of course, but afterward we said our goodbyes, and he walked me toward the door.

“We’ll have to reconnect again sometime when you’re not pressed for time,” I told him. “This is the second time I’ve brought Bruno along and…”

Father put his hand on my arm and stopped us both. “You brought your dog?”

“Yup,” I said. “You were very encouraging when we were considering getting him. I was hoping to introduce you two.”

“Just a minute.” He called into the parish secretary: “I’m expecting a call. If it comes in, tell them I’ll be just a minute. Don’t let them hang up—but I gotta meet Jim’s dog!”

“I love the name,” Father said as we walked to the car. “Did you get him on St. Bruno’s feast day?”

“Nope—it’s kind of a family name, or nickname, I guess. My Polish great-grandfather’s name was Bronisław (bro-ne-swaff), which means defender of glory, but when he came to America, people called him Broni or Bruno.”

I opened the car door, and Bruno, who lay curled and napping on the back seat, stood and stretched: seven and a half months and fifty pounds of fluffy brown and black puppy. I took his leash and called him out, warning Father that he can be a bit mouthy but that he doesn’t really bite.

As if to spite me, or out of respect for the Roman collar, Bruno exited the car, sat promptly and politely at Fr. Nathan’s feet, and allow our priest friend to thoroughly rub his ears, neck, and shoulders while praising his canine nature.

“He’s a beautiful dog,” Fr. Nathan said. “Would it be alright if I blessed him?”

“Of course,” I said, and Father knelt and took Bruno’s head in his hands. Again as if on cue, Bruno’s eyes half-closed and he stretched his face toward Father’s.”

Whether the blessing was memorized or improvised I could not tell, but with beautiful words and through the intercession of St. Francis of Assisi, Father blessed and consecrated Bruno, among other things, to bring joy and peace to our family. When he was done, Bruno loaded up on command and rode home a happier, holier dog.