On Saturday our community suffered a terrible blow: we lost a beautiful, sweet young woman—a daughter, a sister, a friend—in a skiing accident. Bethany was a 2017 graduate and a member of our church’s youth core team. Her younger sister is a close friend of Emma’s, and the friend who was with her at the ski hill is Gabe’s Confirmation sponsor and a good friend of Brendan’s.

Last night the church was home to many families and teens who came to Tuesday evening Mass and stayed for an hour of Adoration afterward, praying for the repose of Bethany’s soul and peace and consolation for her family and friends.

Providentially, the gospel reading was Mark 3:31-35:

In his homily, Fr. Richards spoke of the joys of family life—”Your family knows you…you can be yourself.”—and emphasized that, by word and deed, Jesus made all of His followers a spiritual family. Nowhere was that more evident than in the hour following Mass. Teens and children, adults young and old, prayed and praised God, wept and worried, laughed and lingered long after the Blessed Sacrament was reposed. In my mind’s eye, I saw Bethany smiling. END_OF_DOCUMENT_TOKEN_TO_BE_REPLACED

On Monday, our monsterpiece turned three. Strangely, the fact that, for one special day, the world revolved around her seemed very much like any other day, except that she also got to choose what we had for dinner. Baked mac-and-cheese and meatloaf was the order. (Actually, Double Beetloaf, a tongue-in-cheek name for a family favorite recipe from Jodi’s soon-to-be sister-in-law, Tally.) And a castle cake, with pink frosting and multicolor sprinkles.

Her gift has been hiding in our shed since late last summer: a toy kitchen, complete with cookware and play food, picked up at a garage sale down the street. She’s been cooking vegetable-donut soup, making coffee with baked beans and green beans, and making giant cups of tea topped in strawberry ice cream ever since.

Based on these recipes, she will not be catering her birthday party this weekend, which she somehow convinced everyone she was having by talking about it for the past month as if it were a reality. She has invited two girls roughly her age from daycare, one preschool-age neighbor girl, plus Emma’s middle-school friends Ella, Emma, Paige, and Olivia; and Brendan’s and Gabe’s high-school friends Olivia, Joe, Jeff, Justin, and Joey.

See, they’re her friends, too. She knows them. She talks to them. She claims them. And I think most of them are coming, because when Lily beckons, it’s what you do.

“She so cute!” Jeff’s and Joe’s parents gushed at Brendan’s wrestling meet tonight.

One of the great pleasures I’ve discovered in recent years in antiquing with our four older kids. Rummaging through old junk and treasures is not Jodi’s favorite thing — but the kids enjoy it, and through this activity, they’ve begun to cultivate new personal interests. It’s a delight to see where their curiosity takes them.

For Emma and Trevor, antique shops are like free museums. They wander and browse and ask questions about the novelties they see — and many things appear new to young eyes. Emma is never looking to buy, but is drawn to colorful kitchen implements and old machines with buttons: manual typewriters, adding machines, cash registers, you name it. Trevor has no such particular interests, though his attention is drawn by typically boyish subjects: creatures, toys and games, and oddities. And both (in fact, all four) of the kids are becoming expert at spotting Fiesta dishes for their mother.

Brendan and Gabe are active antique shoppers, and prefer to have money in their pocket when they step into a shop. Gabe likes religious artwork and books, vintage hats, and Coca-Cola memorabilia, while Bren looks for military surplus, historical books, manly artifacts like hunting and camping gear, and anything to do with Vernors ginger ale. Last weekend the three of us ventured out to give Brendan some driving practice in snow and traffic, and hit a military surplus store and three antique shops. Brendan spent $20 on an explosives crate, pictured above, to complement his military ammo box, and Gabe got a steal: a like-new copy of Our Daily Bread for a dollar and change. (Brendan drooled briefly over a signed ink sketch of Captain America knocking the heads of Hitler and Hirohito together, but decided that he didn’t have a couple hundred extra bucks.)

Both of these older boys show a nose for finding the right stuff and finding deals. Last spring, when Gabe and I brought Rosa (my old pickup) home from Michigan, we stopped at a junk shop in northern Wisconsin packed floor to ceiling with old stuff, new stuff, repurposed and recycled stuff — none of it marked. While the old fellow running the place made sporadic attempts to buy Rosa, Gabe nosed around the shelves of “smalls” and emerged with an inexpensive plaster-cast of the classic “praying hands” sculpture, a thimble-sized glass bottle of actual Coca-Cola, and a leather-bound Polish prayer book, pictured below. (Gabe knows how to say a few Polish words, but how he recognized this book as Polish, I don’t know.) He showed them to the old man, who was so intrigued by Gabe’s finds he charged him just a few dollars for the entire collection. 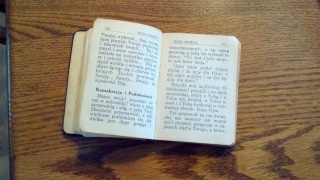 Brendan, meanwhile, has been eyeing an old, unopened six-pack of Vernors at a local shop for a year or so now. It’s priced at $50, as I recall; he went in last fall during a 20-percent-off sale, but still wasn’t sure he could drop $40 on it. He asked at the register if they could take less, and they told him the collector who was selling it had a deal with the shop that they could take 20 percent off his prices, but anything lower had to be negotiated with him in person. Brendan said thank you and walked away.

I told him later that I was impressed with his resolve. “Well, they basically told me I could get it for 20 percent off anytime, so I might as well come back another time when the guy is around,” he said.

Me? I like books, boots, and beer memorabilia; shaving supplies; old tools; and all the stuff they like. Not sure who is influencing whom in this case, but with fresh eyes, what’s old is cool again.

A friend said the other day that it seems like we have a birthday a week in our family during the summer. That’s not quite true, but this year it has felt that way: the day before Jodi’s fiesta was Trevor’s ninth birthday, which included presents and cake. My bride’s party was a few weeks ahead of her actual birthday, and featured a wide range of delicious foods including not one, but two cakes — bringing the total that weekend to three.

Something similar happened last weekend: Jodi’s real, true birthday was Saturday, and Emma and I conspired on a pineapple upside-down cake (which was not from a mix and oh-so-delicious). But since Emma doesn’t like pineapple, she asked that we pick up a vanilla cake mix and vanilla frosting at the store so she could bake a second cake she would enjoy. Unbeknownst to me, she had also made some fondant at a friend’s house some days before and was anxious to try her hand at covering a cake.

Whether because the fondant wasn’t completely fresh, the recipe, or something else, the fondant wouldn’t hold together at any thickness less than about a quarter inch — and Emma frosted the cake beneath the thick blanket, creating a tasty vanilla cake covered in insanely sweet Playdough. (The boys mocked Emma for it until Jodi and I reminded them how much she bakes for us; in the end, even she agreed it was too much.)

Sunday, then, was Gabe’s 13th birthday: Waffles and bacon and a new Facebook account in the morning, but (he insisted) no presents until 2:23 p.m., the minute he was born — then antiquing (he bought a ginormous old pop bottle we’d never seen before), lasagna and garlic bread, altar server at 6 p.m. Mass, and (you guessed it) cake! More specifically, brownies — but still, three cakes in a weekend once again. We played Phase 10, and the kids were more than a little wound up; I on the other hand, crashed quickly and became surly. Lily kept climbing up to (and nearly onto) the table to grab people’s cards. It was sheer, sugared chaos — and all in all, a good day.
We haven’t had a birthday party for Trevor, due to Jodi’s party, nor for Gabe, due to her actual birthday — so we’ll have at least two more small celebrations before the summer’s out. Just two cakes to go!