On Saturday our community suffered a terrible blow: we lost a beautiful, sweet young woman—a daughter, a sister, a friend—in a skiing accident. Bethany was a 2017 graduate and a member of our church’s youth core team. Her younger sister is a close friend of Emma’s, and the friend who was with her at the ski hill is Gabe’s Confirmation sponsor and a good friend of Brendan’s.

Last night the church was home to many families and teens who came to Tuesday evening Mass and stayed for an hour of Adoration afterward, praying for the repose of Bethany’s soul and peace and consolation for her family and friends.

Providentially, the gospel reading was Mark 3:31-35:

In his homily, Fr. Richards spoke of the joys of family life—”Your family knows you…you can be yourself.”—and emphasized that, by word and deed, Jesus made all of His followers a spiritual family. Nowhere was that more evident than in the hour following Mass. Teens and children, adults young and old, prayed and praised God, wept and worried, laughed and lingered long after the Blessed Sacrament was reposed. In my mind’s eye, I saw Bethany smiling.

Of course, that’s how I always see her. I have just one clear memory of an unsmiling Bethany, and I don’t think any of us were smiling in that moment. We were waiting outside a security checkpoint in Poland, outside the massive open area reserved for the papal Mass during World Youth Day 2016. We had walked six miles or so to get there; the sun beat down; the crowd pressed in, and she and one of our leaders looked pale, exhausted, and a little claustrophobic. We formed a wall of bodies as best we could behind them to press back against the crowd, shaded them with whatever we had handy, and shared our water, waiting to be let through for the final mile or two to our campsite (by which I mean a corner of an unimproved, grassy field where we were to sleep on the ground).

And yet even as I type, I see it in my mind’s eye: a tiny tired smile, like an unnecessary apology for being overheated, at the corners of Bethany’s mouth. That night—after rest, food, and Adoration with Pope Francis and a couple million Catholic youth from around the world (not to mention an unexpected, late-night conversation with Jason Evert), her smile was back in full, joyous and unapologetic. 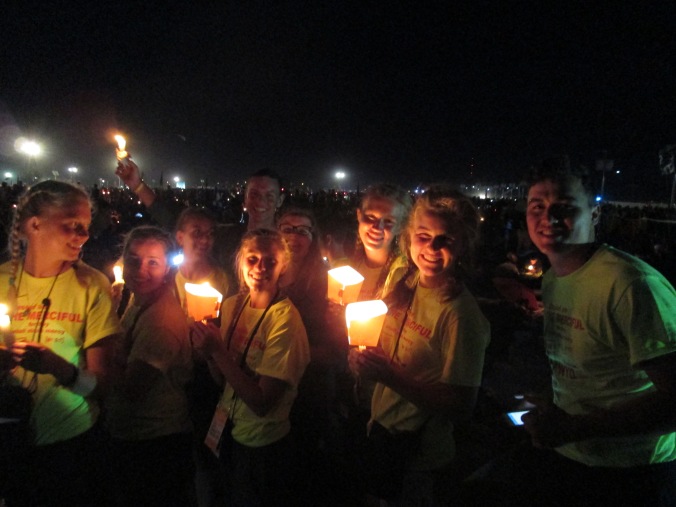 Praying with the Pope and a couple million brothers and sisters…

Look who’s sleeping on the ground next to us: Jason Evert!

Who is Bethany to me? One of my Poland daughters—a group of girls who appear to have adopted me as their “Poland dad” during the pilgrimage. This might not seem like much, but who, then, is my family? We share a set of life-changing memories with each other and no one else. We shared hopes and dreams and struggles; how I met my bride and came to faith; and the joys of canned mackerel and other non-perishable Polish food items. We listened to each other, looked out for each other, tried to be Christ for each other. We loved each other.

Two other memories worth sharing here…

On the day Pope Francis arrived to greet the pilgrims, we had journeyed to a large park in Kraków to see him. The weather turned rainy; it was crowded as always—and you could feel the anticipation of the pope’s arrival. Shortly before he was expected to show up, one of our pilgrims needed the restroom. This meant a long walk through crowds of people to a row of port-a-potties well away from our group, and the prospect of missing the Holy Father entirely should his procession pass by our section on the way to the outdoor staging area and altar.

It also meant someone had to accompany her. Bethany agreed to go and whispered a prayer that somehow God would make it worthwhile if she was not with us when the pope arrived. They left and came back  a long while later, soaked and beaming. Their journey had brought them within yards of the Holy Father as he passed. Aside from a nearby flat screen, the rest of us saw him no closer than a white man-shaped figure, the size of a pea, on the distant stage. 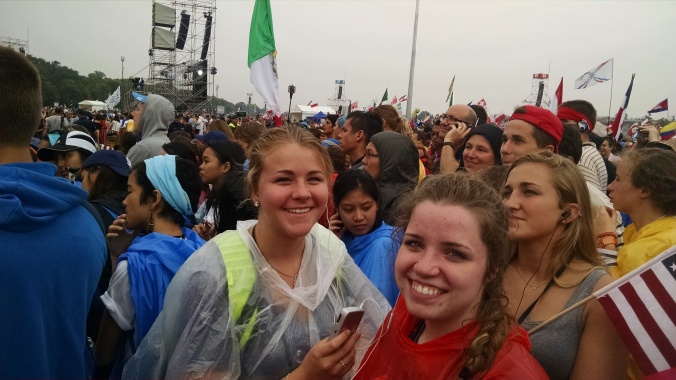 Close encounters of the papal kind…

Months after we returned, five of these girls—Bethany among them—surprised me by treating me to dinner and a night out with just them for my birthday. Here’s what I shared on Facebook at the time:

How is it that I’m so blessed? Late in the week, Jodi told me that I had plans for Saturday. She offered no more detail, except to be ready to be picked up at 6:30 p.m. So last night, five of my “Poland daughters,” beautiful young women of faith who traveled to Poland with our group last summer and adopted me as their Poland Dad, rolled up to our house for a mini-reunion and belated birthday celebration. They took me to Cosseta’s for Italian food and gelato, and to the Stone Arch Bridge to enjoy the river and skyline — and talked, and sang, and enjoyed the attentions of an abnormally proactive and obliging busboy. (I’m sure that I was not the reason he visited our table six times, including to tell us he was leaving, but that there were other busboys on duty.) It was a delightful evening, and I love these ladies. Dziekuje bardzo! (November 20, 2016)

A night out with five Poland daughters

I don’t know if they fully appreciate the impact of this gesture on a man of certain age, who feels at times like time’s a-wasting and wonders if he’s making any impact at all in his work. My wife and children are wonders, to be sure, but they were wonders before ever I affected them, and they know me only too well to give me too much credit.

These young women let an old(er) man know he mattered to them. And I am so grateful. This is a memory I will cherish until I cease to remember anything at all.

I re-posted this photo on Facebook on Monday, and a dear friend from Michigan (Kristina from the “Tales from the Domestic Church” blog) commented: “Spiritual children are truly a great gift from God. People ask me about how often I ‘wish I had girls’ and I smile in response with my heart full with thinking of all my spiritual daughters!”

She’s absolutely right. This takes nothing away from my biological children, who are a very part of me, and it does nothing to equate me with Bethany’s parents and siblings, whose sorrow I cannot imagine. But perhaps I can claim her as spiritual family. Perhaps I can comfort my other spiritual daughters. Perhaps as the old saying goes, love only multiplies; it doesn’t divide. Judging from the Facebook tributes I’ve seen and my own knowledge of Bethany, she has a big heart, and I believe it’s only gotten bigger. There’s enough to go around.

She was a beacon here; she’ll be a beacon in eternity. Farewell, Poland daughter—we love and miss you.

Blogger’s Note: The photo at the top of the post is sunset over the Wisła (Vistula) River in Kraków, Poland.