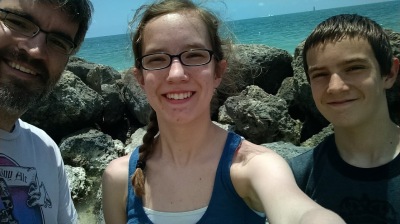 Emma, Trevor, and I spent a lot of time together last week — time enough to have learned a thing or two in common and to have developed a few “in-jokes.” We learned, for example, that when you’re playing Score! (a road-trip game in which you count yellow cars for points*), the game gets faster and more furious as you travel south, as sunshine-colored muscle cars, Love’s fuel tankers, and Penske rental trucks take over the highways. Do rental car companies in Florida stock higher numbers of brightly-hued, late-model Mustangs and Camaros? They were everywhere, and more than half were bright yellow!

We learned that, south of Tennessee, drivers have  little regard for posted speed limits, unless it’s to add at least 15. In Georgia, especially Atlanta, and on the return trip through Alabama, I generally drove five or 10 miles per hour over the speed limit, even in reduced speed zones, to keep from being killed. We laughed to think that, if I got pulled over, it would be because the police figured they could actually catch up to me.

We learned that Florida drivers are the craziest I’ve ever seen. At least in Georgia and Alabama, the need for speed did not come with rage, impatience, or homicidal or suicidal tendencies. In Florida, I was passed by a car at such a high rate of speed (while I was driving 10 over) that the air around us seemed to split and our own car shook. As I regained my bowels and watched that car shrink toward the horizon, a crotch-rocket motorcycle zipped by even more quickly — like someone removing my left ear in one motion, with a Dremel — and vanished into the distance! I also watched two or three drivers, stopped at red lights, who began inching (or rather, jerking) forward into the intersection mere seconds after coming to a stop; one arrived in the center of the intersection while cross traffic was still advancing and made them steer around him!

But the worst example was a driver who rode my bumper as we were entering a construction zone. I was decelerating, but still over the posted limit; he or she was behind me mere moments before deciding to pass…at freeway speeds…on the right…using a rapidly diminishing merge lane lined with orange barrels and Increased Fines signs!

Of course, I always try to oblige the locals, so I added to the chaos, emerging from behind a left-turning semi in a non-freeway construction zone to wind up headed the wrong way into oncoming traffic in a dusty, narrow lane lined both sides with orange pylons. We laughed in retrospect, once I quickly backed between pylons and pointed us back the way we came, and the kids learned that I am, in fact, prone to frightened expletives in times of stress.

We learned that deputies in the Keys will pull you over for a burned-out headlight (“Do you know why I pulled you over?” “No, sir, I do not.”), but the one we encountered was very friendly, even when out proof of insurance was set to expire at midnight that very night! He let us go with a verbal warning and the admonition to get the light fixed ASAP.

We learned that gators can, indeed, be spied along the highways in rural south Florida. We speculated that the panther and bear crossing signs were posted to drum up intrigue rather than to warn of any actual wildlife present, and again, that the bears were escaped polar bears (judging from the shape of the black silhouette on the signs) from an apparently flooded zoo. This odd thought led to further speculation that behind the high fences and tall grasses, Floridians were breeding armadillos and releasing them along the highways of Tennessee — or at least littering that unfortunate state with their carcasses.

The prevalence of roadside armadillo carcasses made roadkill-watching something of an activity, in addition to license-plate hunting (45 states, all but one from passenger vehicles, not trucks or trailers; five provinces; and the U.S. Government) and the Score! game. We laughed at a term I made up as we passed a particularly unidentifiable critter on the pavement: inside-out-opus. Indeed, inside-out-opus may have been the second most prevalent creature we saw along I-75, armadillos being the first, and easily identified by their disjointed but intact bands of so-called armor.

We learned (or rather, confirmed) that Trevor and Emma have the same dark, though nonsensical, edge to their humor as I sometimes have, as when we passed a dead deer that had been clearly blitzed by a large truck. “There’s a semi deer,” I observed to pass the time. Trevor replied, “That’s exactly what it was: a semi-deer…half a deer!”

Another example: After being pepper by no-see-um bites the first night in the Keys**, we discussed now and again the possibility of chewing off our own limbs to rid ourselves of the itch. Emma was in a particularly bad state the evening we were in Memphis — relieved only by the distraction of eating those exquisite Rendezvous ribs. She railed at Trevor his seeming inability to get the bones clean of pork to her exacting standards, which led to the best joke of the trip: as we left Memphis and my own numerous red spots began to itch with a fury, I asked Trevor to gnaw off my feet (since I was driving and unable to do it myself). Without hesitation, Emma said, “He won’t be able to finish.”

In addition to inside-out-opus, we learned two new words, courtesy of Trevor: froth-tips (he meant whitecaps) and crane-truck (he meant tow truck). We laughed to recall Randy telling us of his late Airedale Sandy, who rode with him everywhere and became something of a celebrity in Wetumpka, Alabama — how, if something caused Randy to say an angry word, Sandy would jump in the back of the vehicle until he said, “I’m sorry, Sandy, I didn’t mean it!” We learned that a manatee on a mission can swim more than 20 miles per hour, and that Hemingway’s then wife, Martha Gellhorn, stowed away on a Naval vessel to be the sole woman to land at Normandy on D-Day.

We learned many other things, and laughed a lot — though much of the humor was born of 60-plus hours together in a car. I won’t share more. You had to be there!

* As my kids play Score!, when you spy a yellow vehicle moving under its own power, you get two points; a yellow vehicle parked (on land or a trailer) is worth one point. Yellow Hummers are 15; yellow construction vehicles, school buses, and vehicles with fewer than four wheels don’t count at all. It gets a little touchy at times: designating which shades of chartreuse are too green, or which of signal yellow are too orange, or which bucket trucks, dump trucks, or semis are sufficiently vehicular to not be considered construction equipment, or how to handle a Penske rental lot. After many hundreds of points combined, the final score and victory came down to the last two miles of the trip: Emma spied the last two yellow vehicles and beat Trevor by a mere three points. (She also “scored” multiple Hummers, while Trevor saw none — controversially, the first one came with an accompanying gasp from me, which was followed by Rose saying, “Is that a Hummer? Yeah, it’s a Hummer!” Trevor claimed she didn’t know for sure, so it should have counted. That 30-point swing would have made him the victor by a sizable margin.

** We learned that no-see-ums are a plague on humanity that make mosquitoes and ticks seem quaint and tolerable; the sheer volume of tiny red blistery, burny, itchy bites, couples with the intensity of the itch and the week-plus duration of inflammation (not to mention the sheer madness of a bug you can hardly see carving chunks from your living flesh) make it no competition. Emma got it worst; they loved her, and her bites swelled to pea size early on, like mosquito bites. I was bitten second worst, and Trevor least of all, but still plenty badly — his also seemed to take root and flare up later than ours. Wicked. I won’t make the same mistake and trust the breeze and tent screens to keep the bugs off!

One of the speakers at the Polo All-School Reunion on Saturday was supposedly handed this joke on the way to the stage, so he told it. In mixed South Dakota Catholic company, it went over pretty well – which should give you a feel for where we’ve been, and where we come from. It went something like this:

Seems there was this little town in South Dakota with a thriving Catholic church. In fact, everyone in the little town was Catholic, until a Lutheran moved in from Minnesota (a Norwegian bachelor farmer, Garrison Keillor might say). Every Friday evening, this fellow fired up the grill out back and grilled a venison steak for supper – which was all well and good until Lent rolled around, and the rest of the town couldn’t eat meat. Friday after Friday the aroma wafted through the neighborhood, making the Catholic mouths water, until finally the community called upon the priest to do something.

Their priest paid the young man a friendly visit and introduced him to the Catholic faith. Over the course of several visits, the priest convinced the young man to convert, then quickly tutored him, one-on-one, in the faith. When it was at last time for the man’s initiation, the priest sprinkled him with holy water, saying, “You were born Lutheran and you were raised Lutheran, but from this moment forward, you are Catholic.”

The whole town was greatly relieved – until Friday rolled around, and the aroma of grilled venison drifted through the town. Immediately, the priest rushed to his new convert’s house – then stopped short to watch as the young man drew from his pocket a vial of holy water. He removed the cap, sprinkled the water on the steak, and said, “You were born a deer, and you were raised a deer, but from this day forward … you’re a walleye!”

Another inspiration courtesy of Hubba:

The second golfer tees off, but again, hits the ball straight for the pond. This time, however, the ball rolls lightly across the surface of the pond and drops – plunk! – in the hole.

The third golfer steps to the tee, and just like the others, drives the ball straight at the pond. Sploosh! – the ball sinks like a stone. Moses is speechless. Jesus quietly shakes his head.

There is a ripple in the water as a fish turns suddenly and scoops the ball up in its mouth. It turns toward the deeper water, only to be snatched from the water by an eagle flying by. As the great bird passes overhead, the fish gasps and the ball drops on the green at the edge of the hole. At the sight of the great bird’s shadow, a gopher scampers toward its hole, spooking a butterfly, whose gentle wing-beats send the slightest whisper of wind across the manicured grass, and the ball drops – plunk! – in the hole.