My daily commute has been a blessing of late: relatively smooth and expeditious, with just enough windshield time to pray a morning rosary, then listen, think, and free associate to my heart’s content. This morning’s mental ramble started as I got into the car and backed from the driveway, already reciting the Creed. I made my way slowly through our neighborhood, announcing my morning intentions as I went (the conclave to select the new pope first and foremost today) and turned toward the freeway. As I rumbled over the railroad tracks, I recalled it was Tuesday, and thus, the Sorrowful Mysteries. I thought of that humble title of the Holy Father: the Servant of the Servants of God. I thought of Pope Emeritus Benedict XVI, and Blessed John Paul the Great before him — each a suffering servant and an image of Christ. I thought of the college of cardinals contemplating, voting, perhaps praying that theirs was not the name called. Heavy is the head that wears the crown…

Last night on the way to Brendan’s wrestling banquet, Bren, Gabe, and I were discussing the presidency.

“It would be even funnier if he wanted to be called King George,” said Bren.

“Did you know,” I said, “that people supposedly wanted George Washington to be king after the Revolution, but he refused? The story is that he didn’t want to win independence from one king just to install another.” 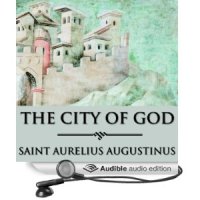 Also on my commutes, especially in the evenings, I’m listening to an audiobook version of The City of God by St. Augustine. It’s a wonderful recording, not least of all because the reader is an older British man with a wise, witty, and kindly voice, who occasionally runs out of wind on Augustine’s longer rants, adding a touch of saintly exasperation to the reading.

The language and writing style are poetic and complex, but the book, thus far, is full of insight and contemporary relevance. For instance, after describing the folly and decline of Rome from many different angles, citing as evidence the descent of morality and the rise of materialism, celebrity, and indecent entertainment, St. Augustine ties the fall of the empire specifically to the fall of liberty and the rise of domination as the fundamental value of Rome.

This makes sense to me, then and now. Liberty recognizes the value of the individual; it can be defended, or in peaceful times, it can be content to live and let live. Domination, on the other hand, is aggressive and discontented by nature; it consolidates power and values the state. Augustine asks if a person might be considered more blessed who had modest wealth, sufficient resources for survival, and peace, compared to one who has untold riches and power and constant fear of war, assassination, or overthrow. So, too, a superpower? At what point did we aspire to be the greatest nation on earth, and what has that cost us?

In November of 1935, Ernest Hemingway wrote a commentary for Esquire magazine called “The Malady of Power: A Second Serious Letter.” Hemingway was a great observer of the nature of men, and of war, and he knew another great war was coming to Europe. He closed the piece with the following:

Whoever heads the nation will have a chance to be the greatest man in the world for a short time — and the nation can hold the sack once the excitement is over. For the next ten years we need a man without ambition, a man who hates war and knows that no good ever comes of it, and a man who has proved his beliefs by adhering to them. All candidates will need to be measured against these requirements.

What makes our previous two popes such powerful witnesses? Both were humble servants who led a flock of millions with steadfast conviction and the utmost humility — Blessed John Paul II, in his willingness to be diminished by illness and age on the world stage for the edification of the world, and Benedict XVI, in his willingness to diminish himself and exit that stage for good of the Universal Church. As we wait for white smoke, and the cry Habemus papem in Rome, I am longing for a Servant of the Servants of Liberty here at home.

*According to Wikipedia, our first president was originally addressed as, “His High Mightiness, the President of the United States and Protector of their Liberties,” but critics thought it “smacked of monarchy.”

One thought on “Servant of the Servants”