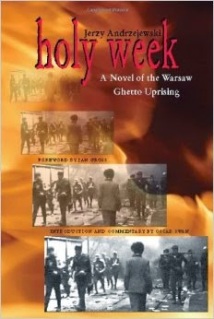 Somewhere along the line these past few years I picked up an English translation of the short novel Holy Week by Polish author Jerzy Andrzejewski. I bought it knowing almost nothing about the book or the author, because I used to study Polish in college, as a tribute to my maternal roots, and because Polish literature can be hard to come by. Andrzejewski is perhaps best know for his novel Ashes and Diamonds, which was turned into a well-known Polish film of the same name by Andrzej Wajda, who has also made a film version of Holy Week. I saw the movie version of Ashes and Diamonds in college and liked it, so I took a chance on the book.

The novel tells the story on the Warsaw Ghetto Uprising and the tragic burning of the ghetto and elimination of Warsaw’s Jews during the days leading up to Easter of 1943 — from the perspective of a handful of Poles whose lives are variously entangled with each other’s and with a young Jewish woman trying to evade the Nazis and their Polish informers.

It has stood on my shelf for a at least two Holy Weeks now, until this past Tuesday, when I took it up on a whim. It is a short novel — just 125 pages — with four chapters covering each day from Tuesday to Good Friday. I took this as a sign and read it a chapter a day, finishing the book’s final chapter this morning.

This is a provocative book that reads a bit like watching a play. The Polish characters reflect the range of Polish responses to the uprising and “liquidation” of the Jewish inhabitants. Most display some level of antisemitism, ranging from mealy-mouthed rationalization of the it’s-complicated variety to thankfulness that the hated Nazis are nevertheless solving the Poles’ “Jewish problem” for them. Only three adult characters avoid being painted with this brush:
The juxtaposition of Irena’s struggle to survive and the ever-present cloud of smoke and sounds of gunfire and explosions from the ghetto against the backdrop of Polish Christians enjoying spring and preparing for the Easter holiday as best they can lends the novel an almost surreal atmosphere. The story was written and published quickly and courageously in 1945, and was not popular among Poles, whose nerves were too raw and wounds were too fresh, and who found the various expressions of racism and nationalism rang uncomfortably true. Even today, this book pricks the conscience, making the reader reevaluate how he or she perceives others and wishes to be perceived — and what circumstances might limit their charity on behalf of a neighbor who is unlike themselves.
The book reads like an English translation from the original Polish — certain expressions do not ring true to American ears, but make sense in the Polish context — and the story will end too abruptly (and without sufficient resolution) for some tastes. Still, it is a quick and thought-provoking read. If you are interested, it is available through the Great River Regional Library in St. Michael, or you can borrow my copy.