“Take my yoke upon you and learn from me, for I am meek and humble of heart; and you will find rest for yourselves. For my yoke is easy, and my burden light.” — Matthew 11:29-30

A few Sundays back, we had a guest priest, Fr. Tony Dummer from the Christ the King Retreat Center in Buffalo. The gospel reading was from Matthew chapter 11, and Fr. Tony recalled growing up on a farm in Oregon and using a team of horses for certain jobs. He said that one of the remarkable things about draft animals working together as a team is that two horses or oxen do not move twice as much, but several times the weight that one can.

He told us that the gospel was an invitation to yoke ourselves alongside Christ and to pull with Him—and that by doing so, we would accomplish so much more than we ever could alone.

The next morning, I found myself reflecting on this homily. Jesus invites us to take up His yoke. I always imagined somehow taking the yoke (or the cross) from Him onto my own shoulders—forgetting that, although single yokes are not unheard of, most animals in most places are yoked in pairs.

He’s not calling us to bear our burdens alone. His yoke is easy; His burden is light, because we are bearing it together with Him.

Then I recalled that Dad used to send his young horses to be broken and trained by the Amish. Often they would take the animal and hitch it between a team of draft horses—usually two big Belgians that were “broke to death,” meaning you could trust them to do whatever you asked of them, whatever the circumstance. 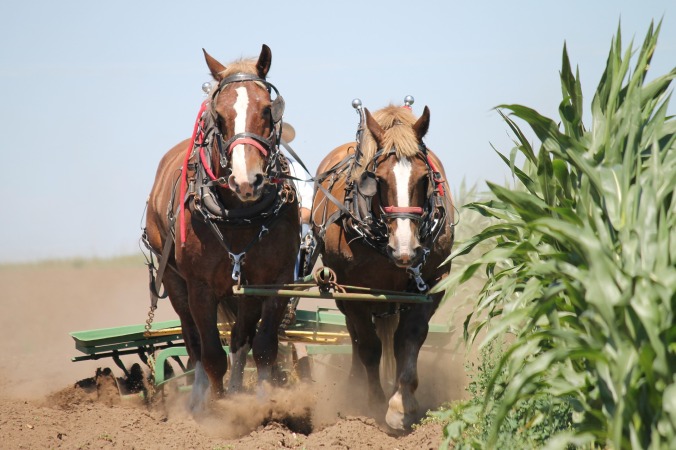 An unbroken horse between two well-trained, one-ton draft horses could balk, buck and work itself into a lather while the team moved forward. In short order, the young animal would realize that it could do nothing against the power that was propelling it, and that life was easier when it simply went the same direction. Over time, it would conform itself to its hitch-mates and begin to pull with them.

Learn from me, for I am meek and humble of heart.

I am hitched, by baptism and consecration, between Jesus and Mary. I am just now learning to walk between them, rather than struggling against them. Soon I hope to pull, in step and in union, and find rest for myself.

God willing, one day we’ll all be broke to death, and together we’ll move mountains.

One thought on “‘Broke To Death’”