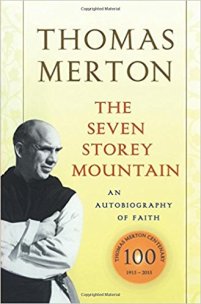 Last night I finished Thomas Merton’s autobiography, The Seven Storey Mountain, which Venerable Fulton Sheen described as “a Twentieth Century form of the Confessions of St. Augustine” and which has entered my list of favorite books, perhaps in the top ten. Unlike some religious autobiographies written under inspiration or strictly under obedience, The Seven Storey Mountain is written by a writer, a craftsman and a poet. It is beautiful—honest and heartbreaking, profound and inspiring. It also provides a window into “enlightened” American culture between the world wars, providing a strong and particularly Catholic rationale as to how we got to this point.

Merton’s answer? In a word, sin. His, mine and yours.

As I’ve written previously, Merton is a complex figure in Catholic literature. Born in France in 1915 to a nonreligious, bohemian couple, he and his younger brother John Paul bounced around the world with their parents and grandparents, who provided them every opportunity and no real anchor. In this respect, Merton’s journey as a young man reminds me of another complicated writer in the Catholic canon: Oscar Wilde. Both men came from artistic and dysfunctional families, both decided to pursue a life of ego and pleasure in and after college, and both experienced a deep fascination with and pull toward Catholicism.

Wilde’s path led him into deeper and darker hedonism, sin and sickness, and his conversion is said to have finally come about on his deathbed. Merton left the world in his 30s to enter Gethsemani Abbey in rural Kentucky and became a Trappist monk and priest, Fr. Louis. Only later in life (well after end of The Seven Storey Mountain) did he begin to drift back into the worldly habits of his youth, and his journals are said to reveal a fascination with Buddhism and struggles with alcohol and chastity. His intellectual and literary gifts suited him to work for the abbey as a writer, teacher and speaker, and the closing chapters of his biography—even that early in his vocation as a monk—spell out in grave and dramatic detail his concern that this work would fuel his ego and call him back to the world he sought to escape:

He is still on my track. He rides my shoulders, sometimes, like the old man of the sea. I cannot lose him. He still wears the name Thomas Merton. Is it the name of an enemy?

He is supposed to be dead.

He is a business man. He is full of ideas. He breathes notions and new schemes. He generates books in the silence that ought to be sweet with the infinitely productive darkness of contemplation.

And the worst of it is, he has my superiors on his side. They won’t kick him out. I can’t get rid of him.

Maybe in the end he will kill me, he will drink my blood.

Nobody seems to understand that one of us has got to die.

All of this is fair warning to say that Merton is not a saint or a faultless spiritual guide. But if you can come to terms that a man may be both a profound Christian thinker and also a deeply broken sinner, this book has its rewards. And if you pick it up and read it, slow down a bit when Merton’s brother, before shipping out to Europe as a bomber pilot, comes to the abbey to be baptized and say goodbye. Reflect on the ways in which God uses our brokenness, and that of our families, to sanctify us. And when you reach the poem Merton wrote for his brother, really read it. Take it line by line, in context of all that came before. It is powerful.

This is what it is to be Church. To be family. To be the body of Christ, given up for others.

For my part, I will pray for Merton, that his stumblings late in life did not separate him from the God he came so far to know and love so well as a younger man. His conversion story continues to guide people like me closer to the Truth.

One thought on “Book Break: The Seven Storey Mountain”